Whilst it is safe to say that there are no bad places to live in Ibiza, where one is always a stone’s throw away either from a beautiful beach or a rolling hill/valley scene, some areas are of course more desired than others. At only 571 km squared, you would be hard pressed to find a journey time of more than 45 minutes from one end of the island to another but journeys become relative and what might be accepted in a city becomes impossible in an island paradise! For this reason families with children tend to cluster around one or other of the international schools. Morna International College, the British International School, is in the centre of the island, in Santa Gertrudis and competition for houses here is high. It is one of the only locations with no sea or country views to speak of, but for families with growing children, on an island with little regular public transport provision, it allows children to walk and cycle into town and limits the degree to which parents either become permanent taxi drivers or are putting their children in taxis, to support their social lives. Santa Gertrudis has a chic selection of cafés and boutiques and whilst most Ibiza visitors and residents accept jumping in the car for every errand, Santa Gertrudis presents an alternative, with its easily accessible amenities and pedestrianised centre. Crucially it is also only a 15 minute car ride from the airport.

Also, very close to the airport and the beaches of the South is the Es Cubells area, the most ‘exclusive’ area on the island. Properties can have very wide sea views, though they are at such a premium that many houses boast a view that requires a great deal of table standing and neck-craning! Es Cubells village is tiny – church, shop, bar – and this area really is for people who require little beyond the facilities of their home and then a car ride to beaches like Cala Jondal, Sa Caleta and Ses Salines, or for a shopping trip into Ibiza Town. The area is well located for the French Lycee (the other of Ibiza’s International Schools) but it is a harder location for growing children, as its beauty lies in its singular lack of development.

By notable contrast, and desired by a slightly different ‘set’, is the rustic North and its gateway, the charming village of San Juan. Here one finds breath-taking raw cliff edges or expansive country vistas with rolling hills and dramatic valleys. It is not un-common to spend 10-15 minutes on a rough and winding dirt-track road, in order reach a house, a trek far less likely in the South. This is the rustic ‘authenticity’ that North-dwellers are seeking and with this location comes a longer airport hop,although it must be noted that the post office in San Juan is the only one where there is never a queue! Living in the far North gives the feeling of being really remote in a place that already feels really remote.

BEST THINGS ABOUT LIVING THERE

Living in Ibiza, particularly in this modern age where technology keeps us all connected, is the closest version around of ‘best of all worlds’. Ibiza, largely due to its migrant community, both those from the Spanish peninsular and also other countries, is a forward thinking, progressive, dynamic place yet communities are kept grounded by the values of the generations old Ibicencan clusters, who respect their land and their natural environment and live as un-materialistically as it is possible to do in the so-called ‘first world’. With minor exceptions (Zara, Mango, McDonalds) there are very few chain stores and brands on the island. Most towns have none and the shopping is charming but limited, so people’s horizons shift. It is great to dip into a sprawling metropolis elsewhere but one soon realises that on a day to day basis there isn’t too much to miss. A relaxed café con leche, €1.20 from a local cafeteria, gives a take-away Starbucks a run for its money any day. There are daily flights to the UK and many other European destinations all year round and in the season (less so outside of it) one can frequent a restaurant, bar or club as cool and current as in any major city.

Ibiza is also incredibly safe. Crime is very low, in many areas people do not lock their doors at night and walking after dark is virtually risk-free. Having children out of sight is completely normal and accepted, which is incredibly refreshing and liberating for people who have previously lived elsewhere or in cities. And a word on the weather. The British are obsessed with it of course, as are most other nationalities, one quickly discovers when living in Ibiza but here the climate is truly wonderful. Even within the Balearics it has its own micro-climate, perhaps not quite as hot and humid as Mallorca in summer (which is good) but nearly always warmer in winter. It is not unusual to have days of 20 degrees in December and January and when there is rain, the sky is rarely grey for more than 2 days in a row before the baby blue returns.

There is no question that some things are expensive on the island, mainly because everything has to be imported. Restaurant prices are high, a ‘normal’ meal in Ibiza might cost more than a normal meal in London. Buying fresh fish from supermarkets and fish-mongers is expensive, even when it is locally caught. Organic produce is expensive, as farmers’ costs are high and demand when spread across a year is low. But buying a coffee is always cheap and so is hairdressing! There are more or less fixed prices across the island and if you find the right stylist you can get a great cut or colour for a fraction of what you would pay back home.

More seriously, Spain has a wealth tax. Remember the last British election and talk of its Mansion Tax? In Spain this is a progressive tax on all wealth, including property. It was suspended for many years and re-introduced during the depths of Spain’s recession. This speaks also to the ever changing

Spanish political landscape; there is still no government following December’s election but all political parties are considerably further left of any party in the UK. That said, the Balearics are the jewel in Spain’s crown and any government, central or local, would tread very carefully with measures that put off the influx of international money.

WHAT THE LOCALS SAY

‘It’s always so good to come home’. It doesn’t matter if you’ve been away on the holiday of a life-time, no one ever minds getting home to Ibiza. If it works for you, if all your circumstances collide in the right way at the same time, there truly is nowhere better to live. 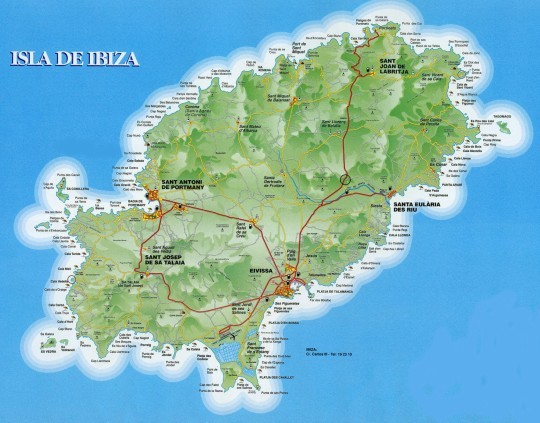