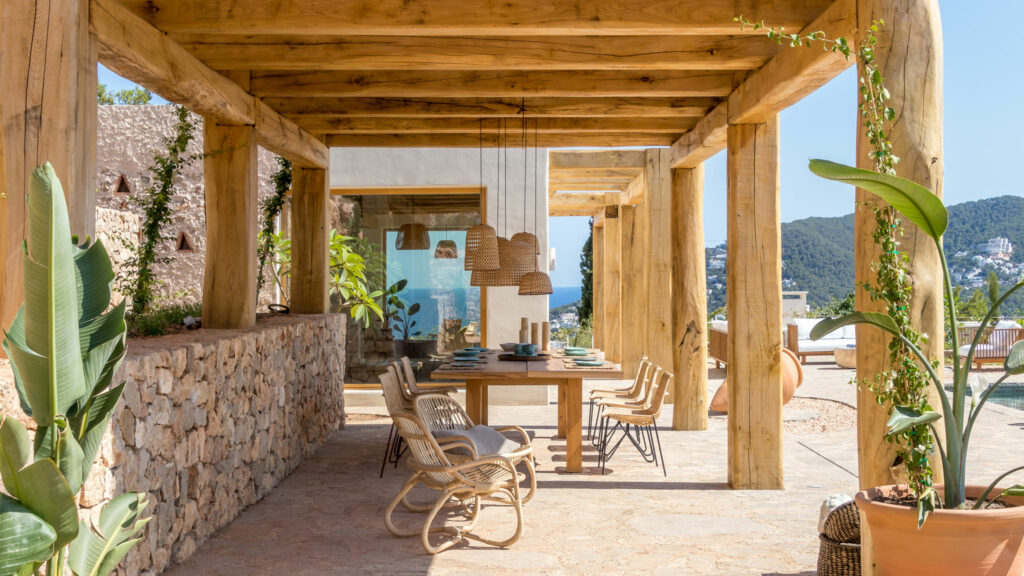 Perched perfectly on a hill on the east coast of Ibiza, Ses Calas has been created by Ibizaliving, the Ibiza architectural practice founded by Bernhard Rustige.

It is the latest manifestation of a philosophy of Ibiza living that favours harmony with the island above all else.

The magic of Ses Calas

Located not far from Ses Calas in the town of Santa Eulalia, Ibizaliving offers planning and design, project management and building, and planning consulting. Its work is grounded in a profound respect for timeless principles such as sacred geometry, classical Ibizan architecture, a minimalist contemporary approach and a fundamental reverence for nature.

Ibizaliving is unique on the island and one of the very few architectural practices in the world that consciously applies the principles of sacred geometry.

From the moment you drive through the gates into the estate of Ses Calas, you’re aware that you’re entering into a different world.

The drive takes you past the guest house, Frida, named for an artist who incorporated magic into her art and designed in the Mexican hacienda style. Unsurprisingly perhaps, the main house is named for Frida’s husband Diego Rivera, known for his more monumental, powerful work.

Diego has at its centre a courtyard with an ancient fountain and sundial representing the spirit that animated its creation.

A number of terraces surround the home, offering breathtaking views past the olive, pine and palm trees of the garden across the surrounding countryside to the sea. Thanks to the south-west orientation and floor to ceiling windows, light pours into Diego all day long. 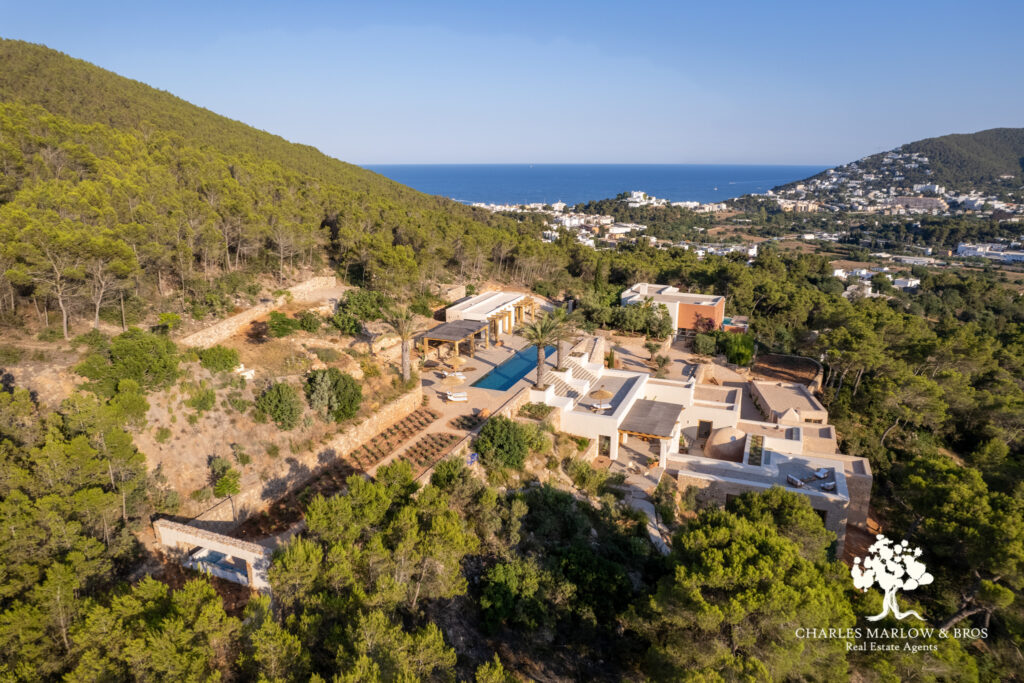 All of which is wonderful but there really is something magical happening at Ses Calas at a deeper level, something to which the soul responds.

This is because every single aspect of Ses Calas is born out of intention, whether it’s how the home is positioned or what materials were used and from where they were sourced. It is the latest flowering of more than 30 years of applying a deeply thought out philosophy to architecture.

Ses Calas and the principles of Ibizaliving

Ibizaliving was founded by Bernhard Rustige. Bernhard graduated from the Faculty of Architecture at Aachen University in Germany. In 1989, aged 30, he left Germany and settled in Ibiza with his family. He’s never left.

In the beginning, Bernhard made architectural drawings for clients. Over time, this led to him launching his own practice. Today, he works alongside his partner Thor Fogelberg Jenson and their five-strong team.

Of his partnership with Thor, Bernhard says ‘Creating architecture for more than 25 years together, we think like one.”

Thinking like one means designing homes using architectural design principles of forms and proportions, orientation and energy, environment and materials to balance and connect them with their natural surroundings.

It means applying sacred geometry, described by Bernhard as ‘The blueprint of creation and the genesis, the origin of all form. Sacred geometry is an ancient science that explores and explains the energy patterns that create and unify all things and reveals the precise way that the energy of creation organises itself. It is said that every natural pattern of growth or movement comes back to one or more geometric shapes. From a tiny snail shell to giant spiral galaxies, the entire universe is built according to the laws of sacred geometry.’

Bernhard also works with the five elements – fire, air, earth, water and space. According to Bernhard these are ‘the basis of all cosmic creation.’

‘Honouring the various elements and their primal energies, we live in greater harmony with nature,’ he explains. ‘Balancing them in a house clears all the stale and negative energies and fills it with positive energies that lead to happiness, prosperity, health, and harmony.’

Alongside such principles, a home like Ses Calas designed by Ibizaliving works with the Fibanacci sequence – a series of numbers in which each is the sum of the two before it – and the golden ratio. ‘Sacred proportions are governed by certain numbers such as phi, also called the golden number. They can be found in all parts of the building, from the layout of facades to the division of the floor tiles,’ he says.

The purpose of using such principles is to enable us to ‘resonate at both cellular and consciousness levels with our environment. Certain forms – thanks to their proportions or geometry, or both – can evoke favourable responses. When architecture and objects embody these principles of universal harmony, they sustain rather than drain us. In this way, the objects and buildings we live with every day nurture our wellbeing, and our homes become our havens.’

Over the years, Bernhard has realised that the principles on which Ibizaliving architecture is based have an effect on people.

‘Sometimes, when I was starting out, I wondered about the outcome of applying these principles,’ he says. ‘But then, suddenly, people became curious to see what I was doing and would want to visit a home before it was finished. Afterwards, they’d say “There’s something here. I don’t know what it is but it’s special and I like it a lot. I want to buy this house to have this feeling.” So, even if it’s hidden and unsaid, people still notice what I’m doing.’

Being in harmony with nature

Ibizaliving’s use of the principles of sacred geometry creates feelings of wellbeing in the people who buy and visit the homes he designs. But it’s also intended to, as he says, ‘do something good for Mother Earth’.

A home such as Ses Calas has been designed to be integrated with its surrounding environment. Because solar orientation is a key design element, it has been positioned optimally in relation to the direction of the wind and sun.

As Bernhard points out, ‘Heating and cooling loads are reduced significantly by adjusting orientation of the long walls of houses east-west, exposing south-facing windows in winter and shading them in summer. We also avoid placing expanses of glass on west-facing walls that receive the full force of the afternoon sun.’

Positioning in relation to the direction of the wind enables natural ventilation rather than having to use aircon.

When it comes to building a home like Ses Calas, Ibizaliving will have worked with materials sourced as locally as possible. They will have used natural and non-toxic building materials such as clay, brick or stone. Hemp, wood, cork and other natural types of insulation material will have been deployed. Plant and mineral-based materials will have been used without solvents. Lime will have been substituted for concrete.

During the construction of the home, water use will have been kept to a minimum and there will have been an emphasis on intelligent site management, especially when it comes to waste.

The outcome will be an energy-efficient home that also benefits the community.

Ibizaliving’s commitment to doing good for Mother Earth and making the world a better place extend far beyond the shores of Ibiza.

In summer 2018, Bernhard heard that the chief of an indigenous tribe in the heart of the Amazon Basin was in need of an architect. The tribe was the Yawanawa and the chief’s name was Nixiwaka.

Nixiwaka’s vision is to create a meeting point for his tribe’s culture and that of the rest of Brazil and the developed world in the heart of Yawanawa territory, at Adelia Sagrada – the Sacred Village.

After traveling to the Amazon Basin, Bernhard offered his skills as an architect to transform Adelia Sagrada into a place where the Yawanawa and people from other cultures can learn about each other. He is working with the Brazilian architect Bruno Azevedo of Bio Habitat in Belo Horizonte and the English architect Thomas Peto of Inner Sphere from London.

Creating the new Adelia Sagrada is an environmentally delicate project so the architectural team’s knowledge of sustainable materials and sophisticated ecological technologies is highly valuable.

The village’s spiritual leaders also acknowledge that Bernhard’s use of the principles of sacred geometry in the project offer a powerful grounding for their spiritual work.

Read more and find out how you can support this visionary project here.

As is instantly apparent from Ses Calas, the architecture of Ibizaliving has a definite aesthetic.

Bernhard, Thor and the team are strongly influenced by pure, timeless ibizan building practices and architecture because of the ‘geometrically beautiful shapes, the attractiveness of their simple lines that amalgamate perfectly into the landscape.’

The influence of Bauhaus contributes a minimalist sensibility intriguingly combined with a use of organic forms, curved lines, natural shapes and mosaic inspired by Gaudi, a big influence on Bernard.

Always connected to the spirit of Ibiza

Despite the fact that, together with Thor and his team, he’s built up a successful architectural practice, Bernhard didn’t actually come to Ibiza to work. ‘It just happened,’ he says. ‘I got more and more clients and projects and so on. Then I opened our office and employed people here and things grew and grew.’

Today he is as much in love with the climate and sense of freedom Ibiza offers and which compelled him to stay as he was when he arrived over 30 years ago.

‘In the summer, I swim. I take long walks with my dogs in the winter under clear blue skies and enjoy the peace and quiet, my family and the good people I know. More than anything else, I’m still in love with Ibiza’s unique light.’

Bernhard and his family are in Ibiza for good and, as an increasing number of people become interested in his work, he intends to build ‘more and more homes applying principles that strengthen the relationship between man and nature and that nurture Ibiza and protect its environment.’