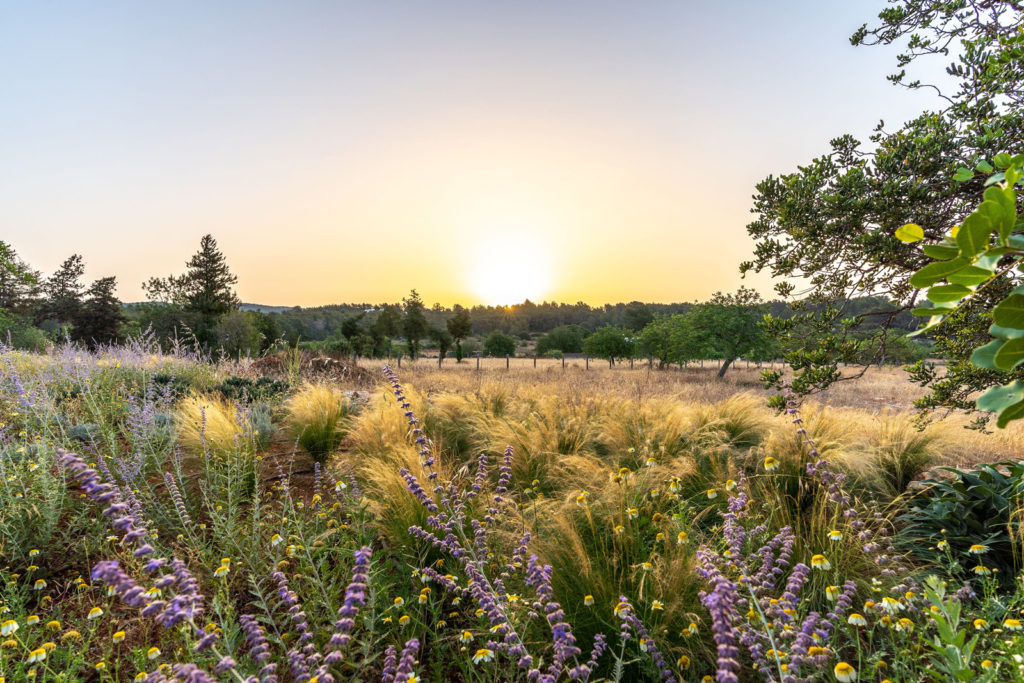 Growing up in a wild, green Ibiza surrounded by nature in its purest form, Jason Watson Todd of Terravita had two ambitions: not to have a conventional job and to support the planet in any way he could. In forming Terravita, he followed a clearly defined path.

Today, Terravita – synthesis of the Latin words for ‘earth’ and ‘life’ – offers bespoke landscape design, architecture and interior design and creates some of the most exclusive homes and gardens on the island, all from a place of commitment to sustainability. 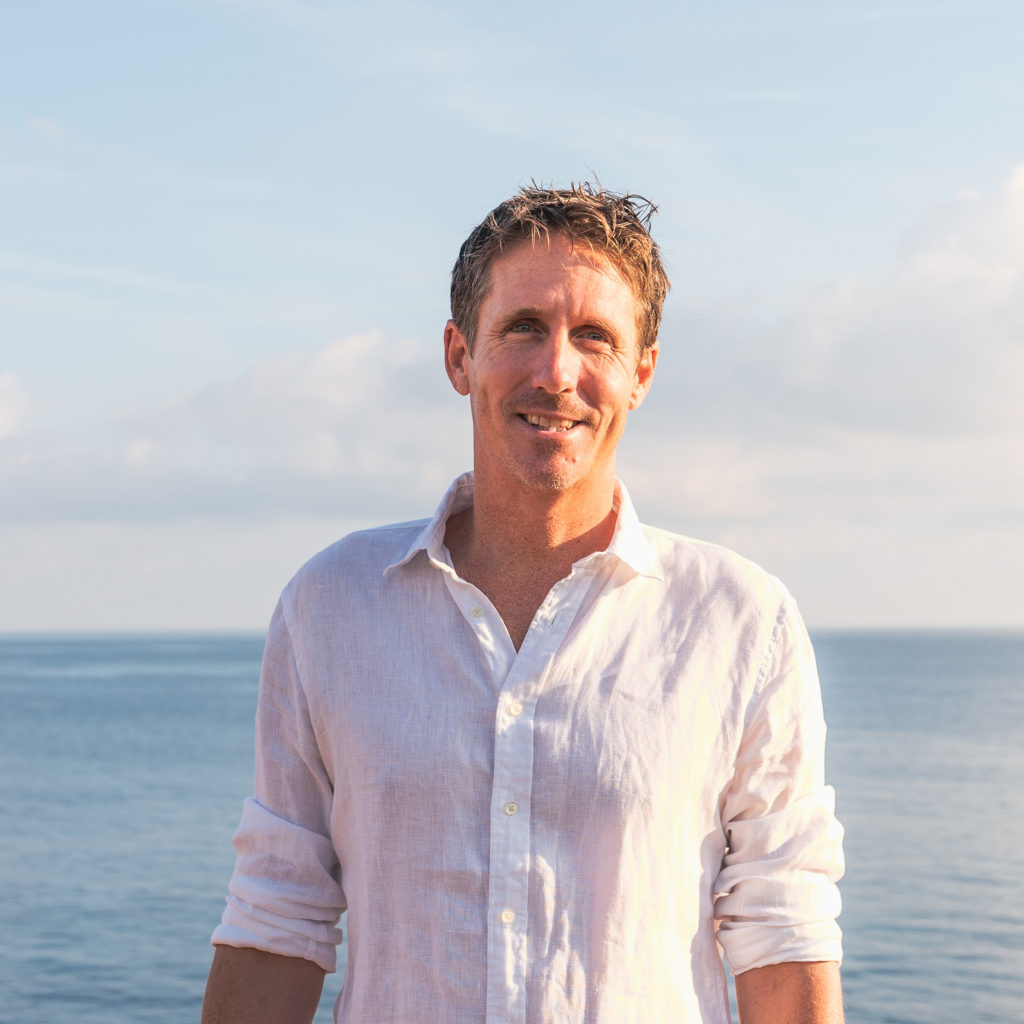 Softly spoken and careful with his words, Jason was born in Ibiza to an English father and a German mother who arrived on the island in the early 1960s. His mother was one of the founders of the Las Dalias Hippy Market in the 80s.

‘My parents were of that post-WWII generation,’ Jason explains, ‘and were intuitively searching for freedom. They came to Ibiza by chance on a sailing trip and thought Ibiza was a paradise where they could create a new life for themselves. So they decided to stay. I’m grateful that they had the courage to leave the mainstream.’

Ibiza at that time was an island where there was only one tarmac road and plenty of horses and carts could still be seen. ‘Ibiza life was very rural, the island hadn’t really changed in about 2000 years,’ Jason says. ‘Reflecting on my childhood now, it’s obvious we were living on the cusp of a new era.’

This new era gave him an unusual and unique childhood.  Tourism was changing the island. People like his parents were creating a different way of living. But ‘running water was a privilege. We had no electricity, so we used candles for light. Television didn’t exist for us. We had none of the luxuries of the modern age, but we were very happy.’

Theirs was a tight-knit community. ‘People helped each other out,’ he says. ‘There was no money, but our neighbours would leave a box of fruit and vegetables at our front door. And, because the island felt totally safe to us, I grew up with an enormous amount of freedom. From around the age of nine or so, I’d be off on camping trips with my friends that could easily last a couple of days.’

Growing up this way, Jason experienced a profound culture shock when, aged 11, his family moved to England temporarily and he went to school. ‘My mum bought some tomatoes,’ he laughs, ‘and I said, “this isn’t a tomato, it tastes like cardboard”. Perhaps it’s symbolic that the first expression of my later fascination with the garden was growing a tomato.’

In England, Jason realised he would never fit in. But he did complete a landscaping and interior design course. ‘Ibiza gave me a creative vision, a profound love of the environment and a drive to be endlessly innovative,’ he says, ‘and my education gave me a certain amount of business sense.’

In 1999, when Jason founded Terravita in Ibiza with his two brothers, his love of gardening and the island on which he’d grown up began to bear fruit. While his brothers focused on construction and renewable energies, Jason concentrated on landscaping.

Today, sitting in Terravita’s tastefully modern offices, Jason says ‘I have nature in my background and my focus is on doing right by nature in a respectful manner. I’m a fan of technology and obviously want my business to be successful but it’s not about money. It’s about finding that balance that we’re all striving for. When I was working for someone else back in the UK, I decided that if I ever ran my own business, I would make sure to create an environment where people are happy and enjoy their work.’ 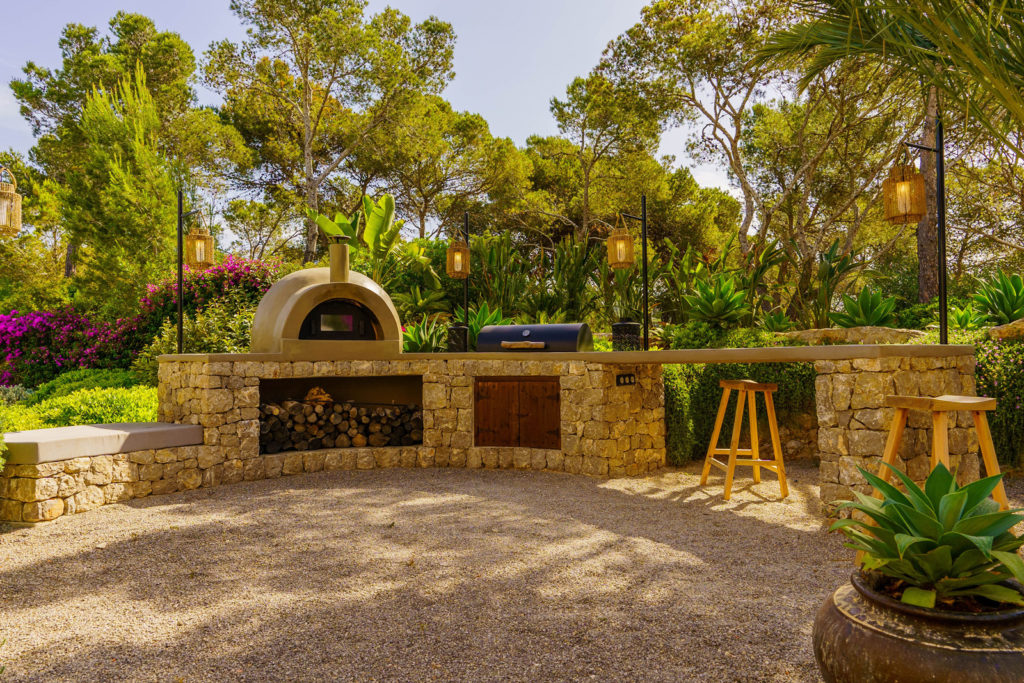 Jason is very clear that Terravita’s success is due to his highly trained, driven, talented, and curious team of artists, architects, biologists, landscapers, and engineers.

‘I’m nothing without my team,’ he says. ‘I pay deep homage to them. They come to work with real passion. Sometimes I have to tell them to go home because they’re not aware of the time. I understand them because I share their feelings. I wake up in the morning wondering what I can create today.’

Terravita’s Green Committee, which meets once a month, is a manifestation of this drive to do good. This is when the team brainstorms ideas that relate to working with new processes, technology, and materials they can offer their clients. ‘The possibilities are endless,’ Jason says. 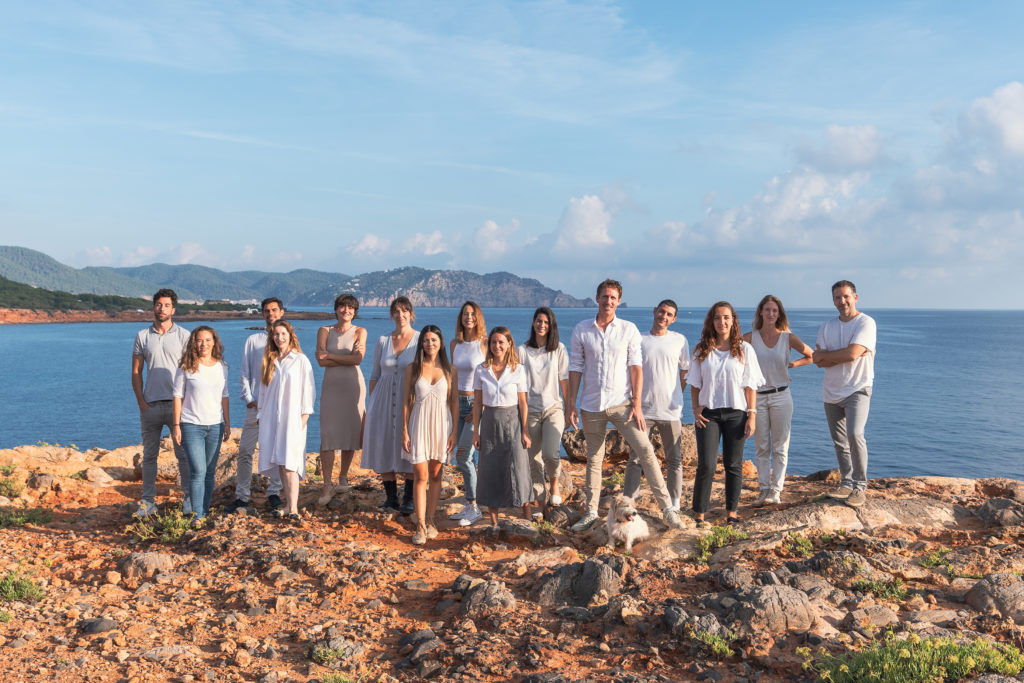 In the years since it was founded, this approach has led to Terravita completing numerous successful of projects with customers who, as Jason puts it, ‘trust us and let us guide them to build their homes and create their gardens and outdoor spaces in a way that is most sensitive to the natural environment.’

Those projects have included designing swimming pools with underground caves and bars, yoga decks, dance areas, tennis courts with living fences and outdoor cinemas. But Jason and his team always consider the environmental aspects of everything the company does.

‘When I’m designing a project, I always study the environmental factors but I’m aware that I have to find a balance with what the client has asked for. So, for example, if a client wants a lawn, I would say, “OK let’s make it as small and as low in water consumption as possible”. There’s one variety of grass called paspalum that’s so tolerant and hardy you can even water it with seawater. I’ll encourage my clients to install an underground irrigation system that recycles black and grey water. If a client wants a hardwood deck, I’ll gently try and steer them in the direction of compressed bamboo which is tougher than some hardwoods and lasts for years.’

Fortunately, Jason’s clients are most often receptive to his suggestions.

‘One of the things I love about Ibiza,’ he says, ‘is that the spirit of wildness my parents responded to is still here. There’s something about the island that encourages people to abandon their preconceptions, be creative, and step out of the norm. My clients are also in love with Ibiza and come to us to help them do what they can to respect the environment, which is great. And, although I have great memories of growing up in Ibiza, Terravita is really about preserving the island for future generations.’

Can Tanca and combining form, function and sustainability

Early on, Terravita made a name for itself by designing natural pools that use aquatic plants instead of chlorine and encourage the presence of birdlife and Ibiza’s spectacular dragonflies. Water from the pool can then also sustain the gardens created.

Today, the growing concern about the impact of climate change on Ibiza means that Terravita is working on an increasing number of projects that use renewable energy, save and recycle water in gardens or perhaps include an organic vegetable garden so homeowners can be self-sufficient.

A shining example of the Terravita approach is Can Tanca, a remarkable project in the green heart of Ibiza that embodies the essence of what the Jason and the company are all about.

Jason spent five years designing and building a zero-carbon villa that, while ultra-modern, is recognisably in the Ibizan tradition. He also paid great care and attention to the soil around the house, preparing it for gardening.

The result is a beautiful, stylish and comfortable villa made from sustainable materials that embodies energy efficiency. For Jason, Can Tanca is quite simply ‘a dream come true.’ 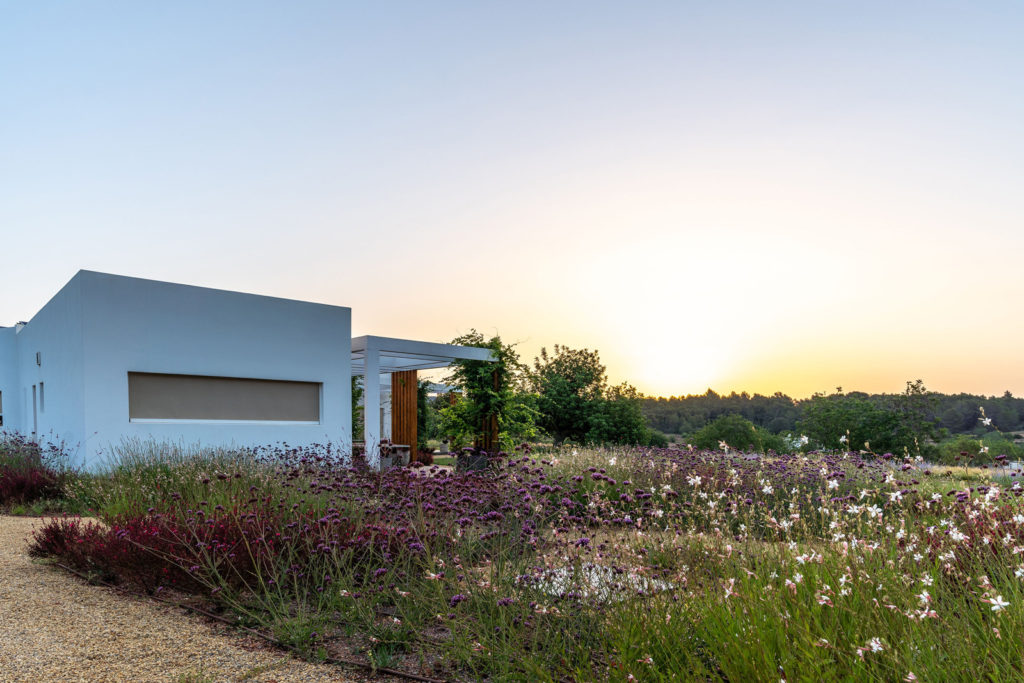 Giving back to Ibiza

‘One of my great pleasures is to watch the sunset and take a stroll along the coast, perhaps to Las Puertas del cielo in Santa Inés,’ he says. ‘For hiking, there’s a pine forest area called Es Amunts, in San Juan. The aroma of wet pines after one of our big summer rains embodies Ibiza for me. And there’s so much of the island I still have to discover– its wonderful little corners, each with its own unique secrets. I have an electric bicycle and I love going down old shepherd’s paths in search of ruined farms and trying to imagine how life used to be.’

This profound love of Ibiza is fundamental to Terravita’s approach to giving back, which starts with supporting school projects. ‘I believe that small gestures make big changes,’ Jason says, ‘and that they’re much easier to incorporate than it might seem. We can eat local and organic food, use sustainable and reusable packaging, walk and cycle more, use electric vehicles and car share.’

At a deeper level, Jason believes we need to move from isolation to connection, to come together and take joint action.  ‘It’s fundamental that we work together and really look each other in the eye rather than only at our screens,’ he says 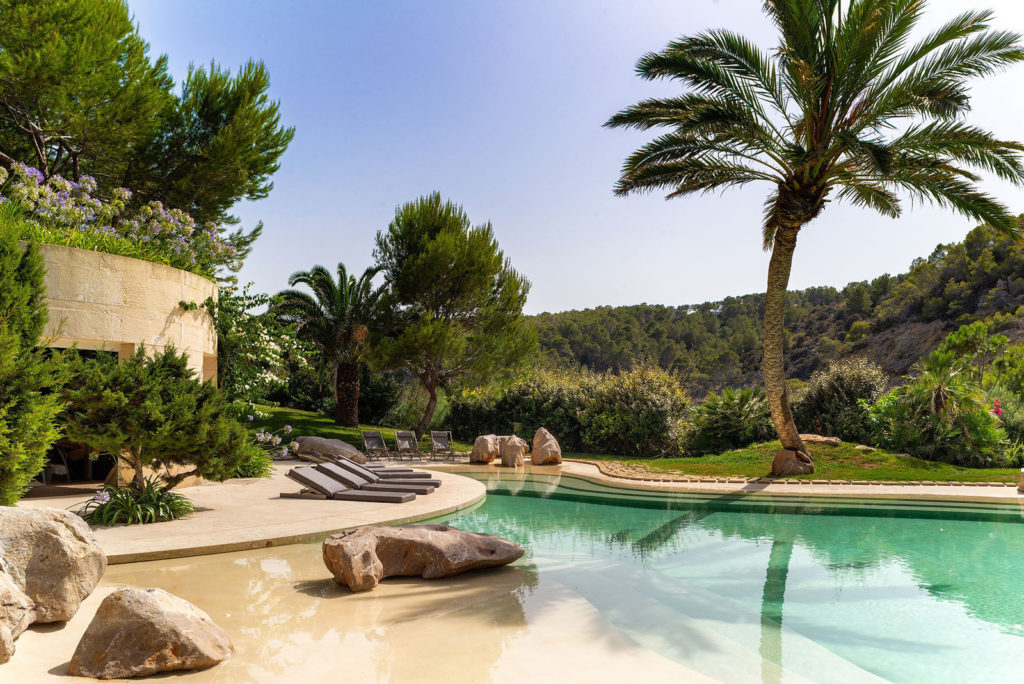 Inevitably, making the change that Jason and others like him want to see in Ibiza will take time but he’s optimistic. ‘Up until now, Ibiza’s environmental policy has been weak,’ he says, ‘but the awareness that we need to do something about climate change is growing momentum.’

For Ibiza, that means sourcing products as locally as possible or even taking advantage of the island’s great soil and climate to grow your own produce, recycling – especially water – and being aware of how much energy your home consumes. It means reclaiming land for farming and repairing the damage to the island done by the tourism boom.

Jason also believes Ibiza has the opportunity to become an example for the rest of the world.

‘This place has always been an island of openminded people,’ he says. ‘That won’t change and now it’s attracting more and more people who want to live and do business here. After all, we’re only two hours away from Europe’s major capital cities. These people also care deeply about the environment and sustainability. I’m often involved in interesting conversations about how we keep the money that’s being made here on the island and reinvest it in the wellbeing of Ibiza itself. There is a lot of potential here to set an environmental precedent and be a catalyst for the rest of the world. I believe if it can happen anywhere, it can happen on Ibiza!’