Ingo Vollkammer of Blakstad & Volkammer has led an extraordinary life so far. Now he’s settled in Ibiza after years of exploring the globe and co-founded B&V with Rolf Blakstad, Head of Design at long-established and highly respected Blakstad Ibiza.

In recent months, Charles Marlow Ibiza has developed an increasingly close working relationship with B&V and now list their properties on our website. Last year we sold Can Tierra. We have just agreed the exclusive mandate to sell Can Citrus.

To a large extent, our relationship has come about because our mutual values are closely aligned. With this in mind, I would like to share a recent conversation I had with Ingo to offer you an insight into his life so far and what drives B&V. 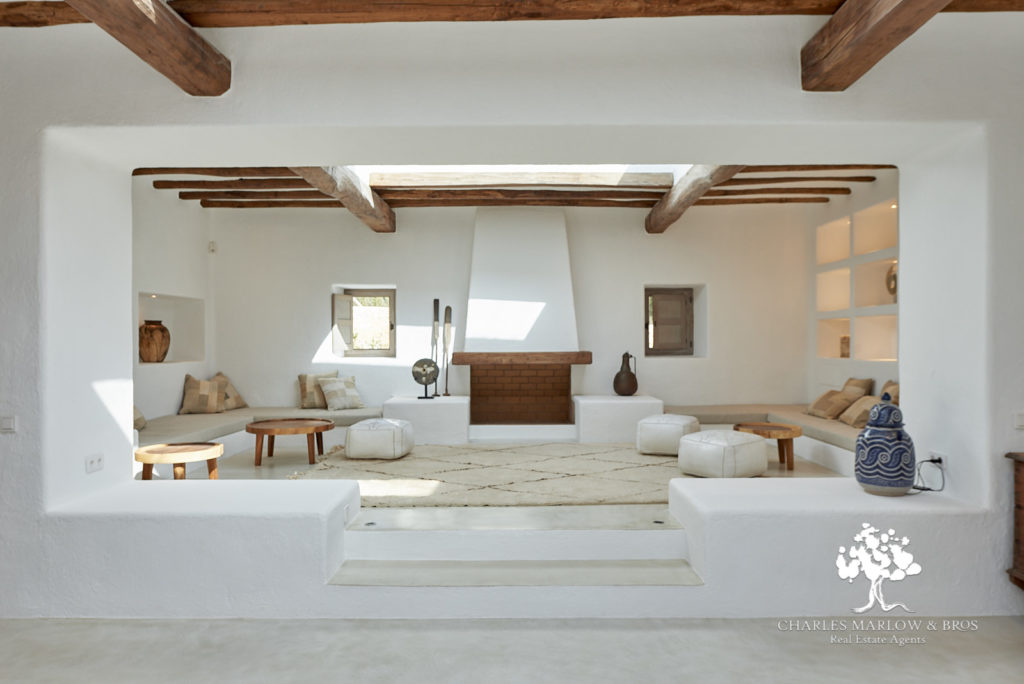 From finance to the movies to Ibiza

Born in Germany and raised in the UK, Switzerland and the US, Ingo began his career in finance and worked as investment banker in London. But his real love was the movies. Moving to Los Angeles, he began producing movies  and launched his own feature film company.

‘Soon after,” Ingo told me, ‘I was pitched a script set in Ibiza and this revived my connection with the White Island.’

Despite this, when Ingo decided to leave LA with his family and return to Europe, he chose Switzerland.

‘We were torn as to where we wanted to settle down and decided on ‘neutral’ Switzerland before realising that its justified reputation for safety, quality and perfection came at a price: bad weather and boredom. My memories of hedonistic times in Ibiza in my early 20s and how much I’d enjoyed location scouting for my movie resurfaced.’

‘I don’t want to be anywhere else. I believe that once you enter the Morna Valley and proceed through the endless citrus and almond plantations towards that rough coastline of endless northern coves, you’ve reached the true Ibiza.’

Ingo suggested his pregnant wife Claudia visit the island and, one weekend in May, she did so. ‘I wanted her to explore what I had discovered years ago,’ he told me, ‘unbiased and free from my characteristic nostalgia.’

Claudia came back with her own take on Ibiza, one that Ingo shared. ‘We realised in a heartbeat that Ibiza offers the closest to a Californian lifestyle we could find. Whether it’s the climate, the attitude, the free spirit, conscious nutrition – you name it – the two places are closer connected than you’d think possible,’ Ingo explained.

On her return to Switzerland, Claudia announced to Ingo that she’d discovered a beautiful finca in the north of Ibiza.

That was four years ago. Ingo and his family lived in the finca near San Carlos his wife fell in love with and which they restored for three years.

B&V was born out of the experience Ingo and Claudia gained restoring their finca and the relationship with Rolf Blakstad that arose out of this.

‘I was well aware of Rolf’s father’s footprint on the island,’ Ingo said, ‘and the work Rolf and his brother Nial had accomplished as his successors. But I felt they could make more of what they could offer. In a spirit of true partnership, I suggested Rolf and I create Blakstad & Vollkammer as a joint enterprise.’

Dedicated to the concept of ‘organic architecture’ beautifully reflected in its designs, B&V creates and markets a portfolio of properties, each with an exclusive, distinctive design built to the highest standards.’

This translates into a fully integrated company creating homes in which, B&V says, ‘historical Ibicencan architecture merges perfectly with contemporary style, interior design and landscaping to create elegant houses for a modern lifestyle.’

Such exclusivity and uniqueness does, of course, come at a price. For instance, a reformation can easily take up to four years. But, as B&V buyers know, it’s worth the investment in ‘unique, organic luxury living spaces, always in keeping with traditional Ibiza.’

Although these are early days for B&V, the company has already completed projects such as Can Pep D’en Pere and  Can Sans that embody its philosophy in action.

B&V also builds houses, including Can Puig which will be ready to be moved into this summer.

Looking ahead, Ingo told me, ‘The next organic step for us is to extend our concept beyond Ibiza and serve a select group of buyers who trust in our vision and execution.’

Ingo and I agree that, as he put it, ‘Ibiza is going through a fundamental transition. It has become more appealing to a very eclectic audience during the last decade and even more so during the pandemic. On one hand this may not serve the concept of commercial tourism, but it will help to preserve the essence of this historic treasure in the heart of Europe.’

Towards the end of our conversation, we put business to one side and talked about why we love the White Island so much. My last question to Ingo was whether he had a favourite part of Ibiza.

‘Since I discovered the north of the island,’ he said. ‘I don’t want to be anywhere else. I believe that once you enter the Morna Valley and proceed through the endless citrus and almond plantations towards that rough coastline of endless northern coves, you’ve reached the true Ibiza.’