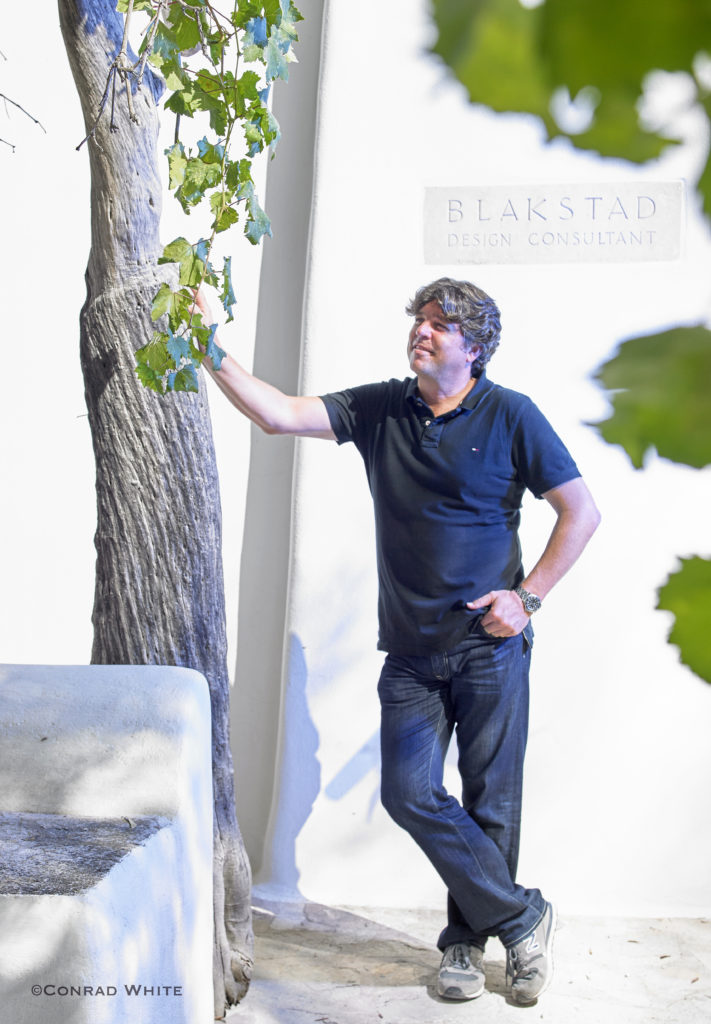 In Ibiza and increasingly farther afield, homes designed by Blakstad Ibiza have come to symbolise a certain blend of style, comfort and understated simplicity that, to the admirer of the firm’s work, is immediately recognisable.

Recently, I spoke with Rolf Blakstad, Head of Design at Blakstad Ibiza about the history and philosophy of this fascinating firm of architects. Over the years, I’ve interviewed a number of architects so admit to having preconceptions as to what Rolf would be like. I was wrong.

Listening to Rolf is like hearing an impassioned academic hold forth. Friendly and open, laughing often, he’s remarkably knowledgeable about the history and meaning of Ibizan architecture. So much so that, although Blakstad Ibiza is highly successful, we barely touched on that side of things in the hour we spoke for.

In this, I would guess that Rolf takes after his Canadian-Norwegian father Rolph, who, with his wife Mary, “hopped off the boat in Ibiza on not much more than a whim” in 1956, as family historian Sabrina Blakstad, puts it. Rolph was an artist who, along with Mary, had bohemian inclinations. Before they disembarked from the boat in Ibiza, they were on their way to Mallorca. Drawn by the reputation of the legendary poet Robert Graves then living in Deià.

At that time, arriving in Ibiza was, as Sabrina describes it, “like landing in another century: the quayside lined with wooden sailing ships, the loosing of anchors, the running clatter as the chains were let out, the excited greetings from the crowd on shore.”

For Rolph, Ibiza Town was “white, pyramidal, a terraced hill rising from the sea with tier upon tier of crystalline cubical houses. They seemed more vegetable than mineral, the softened contours appearing to grow organically out of the ground.”

Like the Phoenicians, Carthaginans, Romans, Vandals, Byzantines, Moors, Catalans and wandering bohemians before them, Rolph and Mary settled on Ibiza.

Artistic bohemia and architecture in the blood

They lived first in Dalt Vila in Ibiza Old Town before moving out to “what was then the small fishing village of Santa Eulalia” with their growing family. From there, the Blakstads moved to a rundown farmhouse in San Carlos.

It was a fundamentally bohemian upbringing. In her childhood, Sabrina “had no idea we had no money…our house was full of paintings, books and candlelight. Everything was simple but beautiful. If we needed something, our dad would make it.”

Although this sounds idyllic, “Rolph understood that something had to change. Bills were paid by jobs as a documentary filmmaker with the Canadian Broadcasting Agency.”

Sabrina remembers Rolph changing into shirts and ties and heading off to far flung parts of Africa or to the Galapagos Islands.

Fortunately, a small inheritance enabled Rolph and Mary to buy a ruined farmhouse in the Morna Valley. This is still a secluded area of pines and fruit orchards today, even if it is dotted with some of the most understatedly luxurious homes on Ibiza.

Purchasing the Morna farmhouse set Rolph on the path of becoming a designer, renovator and architectural scholar. Incidentally, the valley would also give its name to the Morna International College founded by Mary.

As Sabrina writes, “There was no road so we had a donkey that would take us up to the house…It was in that house that I started to learn more about the architecture of Ibiza because it was falling down and us kids had to cart all the different layers out.”

In this, Rolph was passing on a family tradition. His father, Peter, was a master architect-builder who took Rolph with him to building sites and taught him to make architectural drawings at age seven.

“The architecture of Ibiza is only a part of an organic, living relationship between man and nature.” Rolph Blakstad, founder of Blakstad Ibiza

Rolf Blakstad was born in Ibiza in 1972 and grew up in the white island’s romantically wildest years, although, as he says, he was an observer of Ibiza’s most eye-opening expressions of personal freedom and not a participant.

“Aged 13, my summer job was working in my father’s farm,” Rolf told me. “I was working full-time at Blakstad by the time I was 23.”

It was a foregone conclusion to everyone but Rolf that architecture was in his blood, that he would follow in the footsteps of his father and grandfather.

Having listened to Rolf’s fascinating insights into how Ibizan architecture evolved, it’s clear to me that he lives and breathes the principles that inform everything Blakstad Ibiza does.

Today, “the fusion of Ibizan traditions with function, form, and taste is the hallmark of a Blakstad project, dedicated to conserve the cultural significance of the island in today’s architecture…design based on historical Mediterranean, primarily Ibizan, architecture, combining style and building techniques to suit contemporary lifestyles.”

In practice, this results in design by the 12-strong international team that respects the four principles of sustainability as defined by Rolf.

“One: although a no-brainer as it’s often passed over, vernacular design for the climate will usually be sustainable. Two: Build with sustainable materials and methods. Three: principles one and two should keep energy requirements low while smart systems are evolving quickly and will reduce the amount of energy consumed even more. Principle four is more about a healthy house. This is influenced most by principle two as sustainable building materials will often be from natural sources.”

It also manifests itself in Blakstad’s somewhat quirky incorporation of archetypes of Ibizan life into the homes it designs for high net worth international clients.

The firm has restored a number of the ancient towers originally built as watchtowers for Ibizans to scan the horizon for Moorish pirates and, if necessary, raise the alarm. They have also refurbished modern built towers.

In one instance, the owners of Can Sol de Mencia transformed their tower into a unique dining room. At Villa Harko, a tower was incorporated into a “sleek contemporary design”.

The result of this mix of respect for Ibizan tradition and the finest in contemporary design means that a Blakstad home is, as Charles Marlow Ibiza’s Charlie Hill says, “A Blakstad home is a portal into the timeless spirit of Ibizan life, seamlessly blending traditional and contemporary white island living. I love them and so do our clients.”

What I didn’t realise about Blakstad was that the approach that makes the homes the firm designs so outstanding is also driving their growing success beyond the white island.

When I said that I’d assumed the Blakstad approach was so quintessentially Ibizan, Rolf launched into a thoroughly entertaining explanation of how island architecture adheres to fundamental principles found all over ancient civilisations in the southern hemisphere.

The most memorable for me is that houses were often entered through the roof, a feature the firm is incorporating into the home it’s designing in Phoenix.

After Rolf’s impressive impromptu lecture, I felt a little foolish asking a couple of what suddenly seemed banal questions but went for it.

I wondered if Rolf could tell me the biggest change he’d seen on the island since his childhood.

“Growing up on Ibiza is like living through history on fast forward,” he said. “It’s gone through the same profound transformation as the rest of the industrialised world, only compressing centuries of change into a few decades.”

And could he sum up the essence of Ibiza for him. After some deliberation, he said, “I think it’s when I see an ancient, gnarled olive tree in among the concrete, metal and gaudy plastic signs somewhere mundane like the corner of a poligono – a business park. It reminds me that the essence, the spirit of Ibiza will always endure.”

We are proud of our relationship with Blakstad Ibiza and delighted to offer a number of beautiful Blakstad Ibiza homes, including Can Tierra, Can Puig – completed end 2021 – and Casa Bloom, completed in around 15 months.