As the New Year begins and the island continues to cleanse itself from the past tourism season, I wonder what I can do on a personal level to help. Cleaning up the beaches with my children, not using plastic bags, being conservative with my water usage? With the Ibiza Preservation Fund actively promoting and organizing sustainable initiatives on Ibiza and Formentera, I have decided to ask Sandra Benbeniste, a driving force of the IPF, what she can add to my green checklist.

Have you always been a passionate environmental activist and what was it that brought you to Ibiza?

I am originally from Barcelona but have been coming to the island all my life. Back in the 1960’s my grandfather built a house in Ibiza and my family and I would be over every holiday. The years passed and the number of tourists visiting the islands grew greater each year. I started to notice that some of my favorite beaches and even the countryside had started to loo

k very developed. There was a period in which I didn’t come back, I was busy studying environmental law and had become passionate about promoting sustainable development in Mexico and Guatemala. Then I met my husband, a photographer, and we came back to Ibiza to visit. I noticed how much the island was still well preserved and also how much it needed protection. This time I felt concerned with Ibiza’s future, I wanted to help it preserve its rich resources and help it find a sustainable path. That was when I started to work with the Ibiza Preservation Fund.

Tell us a little bit about the Ibiza Preservation Fund (IPF)? What themes does it focus on?

The fund has been active for the last 10 years in Ibiza and Formentera. It aims to protect the islands fragile ecosystems, both at sea and on land and devotes a large part of its time to energy, water and waste issues. With over 4 million tourists visiting yearly, the islands have a hard time regenerating themselves. Some of the newer things we are working on involve helping local product distribution as there are many bottlenecks in this process and creating a sustainability observatory based on the one that exists in Menorca. Having more solid accurate indicators and current data allows islands to be better prepared and create more effective strategies so we would love to be able to help Ibiza have an observatory. 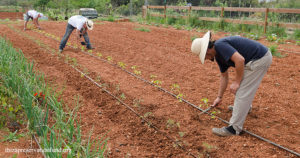 Where does the IPF’s funding come from? Who does it partner with?

The Fund is a completely private organization. It was created ten years ago by some British Ibiza lovers and was originally under the umbrella of an English charity with Ben Goldsmith’s family. In 2015 it became its own legal Spanish entity and continues to receive individual donations from foreigners. A lot of these foreigners own second homes on the island so their donations are a way of giving back. They want to make sure that the islands remain beautiful for the future.

We are open to everybody who wants to protect Ibiza. Those with a similar vision, interested in helping us strike a balance between economic and environmental sustainability. We understand the benefits of multiple partnerships across different sectors and this is very much the way we operate and run our various projects. We play a sort of octopus connector role on the island between the non-profits, local government and the private sectors.

Would you say the general public is aware of the environmental issues facing the island?

Not really, people are not so aware. I think there are two Ibiza’s. People live here in the countryside but they don’t really connect to real issues, they don’t connect the dots. For instance, there is still widespread usage of single-use plastics. A lot of people are unaware that this is the plastic that could turn up on their beach. There needs to be more education revolving these topics both for younger and older generations. It is sometimes harder to influence and change habits of the older generation but it is possible and we can do it.

How can the general public get involved? What should they know?

I think it is very important to talk about this, about the practical tips we can give people so that they can effectively “give back” to the island. It’s about thinking global but acting local. Sometimes it is easy to be overwhelmed by the scale of it all.

Also I think it is important to dispel some of the myths that are floating around that may mislead the public. Firstly, WATER on the island does NOT come from the Pyrenees! Secondly, RECYCLING does not get mixed up and shoved into general waste. Instead it is separated into three containers and then yes…. recycled. Thirdly, there are no exorbitant taxes associated with SOLAR generated power. With a minimum of 300 days of sun a year, it is a profitable and sustainable energy solution.

What kind of vision do you have for the IPF in Ibiza and Formentera over the next five years?

I would like to strengthen what we have now. Our evolving and growing partnerships will be key as will the technical support for preservation. My hope is that the public will take a positive message from all of the work we are doing and that it will inspire them to think and know that they “can do it”, they can actively and on a daily basis, preserve and protect Ibiza and Formentera through sustainable practices.

For more information on the IPF please visit: www.ibizapreservationfund.org