Ibiza is an inspiring island for all things creative. Music and the arts are deeply rooted in its fabric, weaved into its shores, into the raw beauty of its countryside. At times it does seem like most of the music ringing out is electronic, house, trance so when quality, live acoustic music echoes out, my ears are peeled. It appears that an authentically new and yet familiar kind of party is happening on the island. I went to check it out last night and the show I saw rocked my electro- saturated world and propelled me into a different dimension. Ready to press repeat… 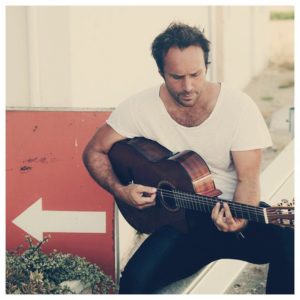 We followed a vintage car with our masked host to a “secret” location. A number of really talented folk and rock acoustic musicians of which violinists, guitarists, singers played…the vibe was relaxed and bohemian. There we sat in the middle of the woods, starry night, supported by plush colorful pillows as we sipped on red wine and enjoyed our candlelit performance. Intimate feeling enough to be in our own homes we listened as the music resonated through the woods, feeling inspired.

The whole concept was so unique that I decided to interview the founder of Secret Gigs Ibiza, Justin Manville, to find out more about his project.

Before we talk about Secret Gigs on the island why don’t you tell us a little about your background?

My youth was spent in a Bohemian styled house with no electricity in Yorkshire, Sussex. My parents were super creative types and our home was always open, there was singing, arts and poetry. I first tried a guitar at school when I was 4 or 5 years old but I was so timid and remember being so annoyed after a lesson that I dragged the guitar home, I literally put a hole in it. I didn’t really play again until I was about 10 years old, completely inspired by Joni Mitchell. But then I was also very good at playing cricket and was on the Yorkshire team. I played both the field and the guitar for a while and at the age of 15 was part of various bands. One of these, Red Lane, started gaining momentum and by the time I was 18 we had gathered quite a following. But the band didn’t get on so I left and headed to Ireland where my parents had an old pub.

There was a lot of singing and Irish storytelling happening at the pub and it touched me deeply. The quality was much better than in England and a lot more authentic than what I had previously experienced, so I started to play there. Soon after, in Pickering forest I played tracks with my niece, Zoe Manville, as she was recording her first album, Mother’s Ghost. It was then that I began a completely different journey, I started playing with musicians at Marina Guinness’ house, everyone from The Police, Marianne Faithfull to Damian Rice were there, storytelling, playing acoustic solos, sharing music.

When did you first arrive in Ibiza and what was it that attracted you to the island?

About ten years ago, we were living in swanky London, travelling around America and then over to Ibiza for Jamie Morgan’s wedding. There was some secret song singing at the wedding and it was all part of the Neneh Cherry’s buffalo movement. Chloe, my wife, and I were blown away by the island, by the people and knew we would return soon. We explored other places but came back every summer and in 2013 we decided to try out a winter on the island. Our daughter was 3 months at the time and she loved it. We lived between Ireland and Ibiza. When my dad passed and Chloe’s brother died tragically we decided to move here permanently.

Where did the idea for the Secret Gigs Ibiza concept come from? What was behind it?

Over the last few years I had been doing a few stints back in London, Ireland and Yorkshire. It got me thinking about heritage and feeling proud of my Yorkshire past and Irish soul. Ibiza being such an inspirational place, I wanted to create something special, something unique through music. I decided to get together some talented artists and start running intimate unplugged home concerts, pop up style, in unique and mysterious locations on the island. We have had musicians like Lettice Rowbotham, Alain Clark, Jakob Oschmann and the vibe has been bohemian, uplifting with a lot of soul.

How have Secret Gigs evolved since their beginning? How many have you run? Who attends?

In 2015 we ran the first gig and there were 60 people. Since then we have run 11 in total and they have really evolved, like anything that you do over and over with passion. The events started to have a kind of natural flow and their quality just kept getting better. I think the production end has also gone up a notch each time. The shows have a kind of magnetic draw to them, a magical creative touch with music. It is a mix of people coming and for the first 9 we charged nothing in the monetary sense of the word. We did charge for the last one but it was a bit of a different event as we performed a play. What has been very important to us from the start is making sure that the musicians get paid for their performances.

Is this the beginning of something bigger?

Definitely. At the last event, number 11, a group of us performed a play. It was black tie, champagne and fresh food. People really focused on the play, focused in on the music. Through mediums of music, theatre, performance arts, we are taking people into fantasy worlds, inviting them to journey. We are storytelling, always mixing the music back into it. During these events I feel my mum and dad are omnipresent, like red admiral butterflies. I really want the events to be top notch, the standard to be high, to make my parents proud.

How does Ibiza provide inspiration and feed your creativity?

I think Ibiza is designed for you to give to it. It’s like a love affair. Like a difficult love affair with an emotional woman, it’s best to give it your energy. Creativity is part of the islands DNA, cyclically, for years, from folkloric dance to the live music on the island. It is a deeply inspiring place.

When can we look forward to the next gig? What is your vision for Secret Gigs on the island?

The next gig will be on New Years Eve in the north. There isn’t much going on up here especially for those who are not into the banging club music on the island.

We are starting to think bigger with Secret Gigs, it has become an umbrella for world unplugged. We have started collaborating with musicians in Amsterdam to create Ibiza Unplugged. Globally there is a real movement focused on greater wellbeing and living a healthier lifestyle, on meditation. So what we want to do is fuse music into this approach. There are a lot of really great acoustic artists who are tired of all their soulless touring and who want to come back to a more authentic, genuine, soul filling kind of jam. We want to attract these musicians to the island and are organizing a festival scheduled next May to give them an outlet to perform. I think the main challenge will be to keep the events authentic, small, with the right people who can really focus in on the quality music being performed.