Shadows Across the Moon and understanding Ibiza18th September 2017

Shadows Across the Moon and understanding Ibiza

The inscription at the beginning of Helen Donlon’s recently published Shadows Across the Moon reads, in part, ‘…for the real Ibiza, which will always, always be there’.

A clue to what for Helen, arts and clubland correspondent on the island for many years, is the real Ibiza lies in t

he subtitle to her terrific, illuminating book: Outlaws, Freaks, Shamans, and the Making of Ibiza Clubland.

Because this is an

island where ‘there have been pirates, outlaws and freewheeling individuals destroying or laying down procedures for living and partying for centuries’.

If you want to know how Ibiza became Ibiza, this is the one book you should read. 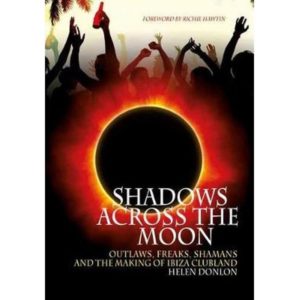 Gods and goddesses ancient and modern

For Helen, and I suspect most if not all of us, Ibiza has a ‘unique energy’ which has made it a special place for centuries. Shadows Across the Moon begins at the dawning of Ibiza’s history when the Phoenicians worshipped the moon goddess Tanit and Bes, the Egyptian god of home protection, music, dance and sexual pleasure – bearded, with a huge phallus.

As Helen reminds us, the Happy Mondays’ freaky dancer was another Bez. A highly appropriate coincidence (or was it?) that delighted the clubbers who collided with the band as they rampaged across the island.

Tanit’s legacy lives on in the full moon parties at Moon Beach on the north of the island and Sunset Ashram, Platges de Comte.

According to Helen, the superstar DJs who came to rule Ibiza, many of whom she interviews in the book, definitely see themselves as mediums and shamans who send their thousands of followers into a healing trance with music. Even if, like DJ Armin van Buuren, they have their own private jet, they too worship the power of music.

Helen is excellent on the subject of how Ibiza was discovered by the beatniks, the forerunners of the hippies, and the evolution of the islan

d vibe. As she puts it, ‘what happened on the island before the clubs is also the reason the clubs became necessary in the first place’.

int for hippy travellers drifting around the world, called peluts by the locals – Catalan for ‘hairies’.

Among these were such hairy eminences as Nico, Bob Dylan, Joni Mitchell, Jimi Hendrix and Pink Floyd. The Floyd, in particular, helped shape the music of Ibiza with their albums Ummagumma and More, the latter being the soundtrack of the 1969 Barbet Shroeder movie set in Ibiza.

Incidentally, if you’d like to see a nice and sleazy early example of how Ibiza’s free-spirited culture was represented on film, go here.

The part played by followers of Osho, or sannyasin, in the evolution of Ibiza’s music and clubbing scene is particularly intriguing. Called ‘los butanos’ by the Ibicencos because their long orange robes made th

em look like the orange gas canisters, the first sannyasin arrived on the island in the 1980s. They bought the trance party ritual with them.

An abundance of characters

The rollcall of DJs and scenesters interviewed by Helen is impressive. But it’s the minor characters who are most fascinating.

Just to give one example, she tells the story of Dutchman Bart Huges who was turned onto the link between the volume of blood in the brain and the sensation of being high by an Ibiza freak named Titi. Titi got high by standing on his head. Huges went one further and revived the ancient practice of trepanning, drilling a hole in his head where the third eye is supposed to be.

This, Huges and the hippies who followed in his wake believed, enabled them to maintain ‘a childlike level of unrestricted brain blood volume for the rest of your life, which in turn enhanced a wider consciousness.’

Fortunately, this one aspect of the hippy lifestyle that didn’t catch on.

Dark side of the moon?

As Richie Hawtin, founder of ENTER., writes in the foreword to the book, ‘inviting people to escape, to isolate themselves from their own reality and to step into an alternate universe of make-believe experiences…a black hole in the middle of the world where everything is possible’ is fundamental to the appeal of Ibiza itself.

But it’s not surprising that a culture where, to quote the 1960s mantra ‘nothing is true, everything is permitted’ will throw up a fair number of casualties. And it’s tempting to see the island itself as one of them.

Helen doesn’t shy away from describing how drug dealers, the sex industry and corrupt politicians all took, and take, advantage of the notion that Ibiza is just one big nightclub to be bled dry. But her love for Ibiza, and faith in the island’s healing magic, leads her to write this lyrical passage, worth quoting in full:

‘When the last club tourists have gone home after the season has folded, and the frogs have disappeared into winter retreat with the cicadas, and the shutters are rolled down across the beaches, and the winter oranges hang in the night breezes, and you’re walking at midnight through the deserted pastures of Santa Agnès during the headily scented almond blossom season, or you’re gathered with friends from all over the world for multilingual home-made feasts in a house in the depth of the forest, or you’re just watching the sun rise on the Mediterranean as the first bars open in the port under the morning mists…Ibiza is always the place where you can stop and peacefully dissolve into the environment. And then this ancient island is timeless; its past, present and future quietly infusing the landscape all around you, mercurial and yet, somehow, always the same, always just itself.’

This sheer love of Ibiza animates Shadows Across the Moon, especially chapter nine which anyone should read if they’re in the mood for a road trip through the heart of the island. 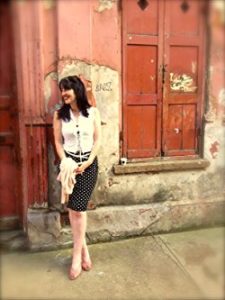 Shadows Across the Moon is published by Jawbone Press and available from Amazon.

A couple of soundtracks

Helen has put together a Spotify playlist to accompany the book here.

Listen to some of the tracks that helped shape the Balearic sound here.

This article was written by David Holzer, he writes our Mallorca blog and shares a passion for the culture and history of The Balearics Islands.