We’ve just returned from a glorious walk/hike/general lugging of equipment in the south west of the island, high above the beautiful horse-shoe beach of Cala Bassa. We were 5 adults, seven children, 2 dogs, a bike, a scooter and a pram (big mistake). It all kicked off fairly well at the start. The right temperature for long sleeves and an extra in-case cardi tied round the waist. I was all ready to dash to Decathlon to buy some emergency crampons but OH reined me in. I do like to be prepared but in fairness, this could have been done in flip flops.

It was a little windy but bright blue skies surrounded us and we were all very jovial. The 2-year-old was running, not walking, which should have raised alarms but nothing was going to spoil this moment of wholesomeness. Did I mention that the oldest has been off school all week and still had a low fever? The non-neurotic ‘new’ me was persuaded that some sea air was all he needed for that final push towards complete recovery.

What this parable is really about is dogs. Remember we are strictly urban family who suddenly woke up one day and found themselves living on the edge of a forest. No design, no grand plan, just following a feeling. In our first year in Ibiza we were standing in our drive when a dog slightly higher than the height of my daughter snuck past the closing gate, trotted straight towards her and slowly circled her. Clearly my reaction was a state of useless and abject panic and ensured that she spent the next 8 years shivering, screaming and demanding to be held the moment a dog, whether a poodle or a pit-bull entered her eye-line.

Of course the baby who was born here in Ibiza is the total opposite and is the kind of child who thinks nothing of reaching up and sticking a playful finger in a canine’s eye and no doubt we will one day come un-stuck. Touch wood. The oldest one (feverish one) has the smug disposition of one who is never been bothered by a dog. Remember, the original invader swerved past him to make a bee-line for his sister. This has left him somewhat neutral, though he has never been seriously tested. But one by one every household we know has succumbed to the ‘outdoorsy we live in the campo, done thing’ and become a dog family. Even the daughter has mellowed from a state of paralysis to a subtler ‘find a hiding place’, when in the presence of a dog. We are the last ones standing.

There is actually a big problem with strays on the island, though there are wonderful rescue homes that take the animals in and care for them, in the hope that they can be re-housed. I know several people, including Simon my superstar hairdresser, whose dogs came to them. His dog, Burger, was at his door one day, a scared, timid little thing, kind of asking to be owned, almost certainly a victim of abuse. Then there are my friends, whose rescue dogs, Chekhov and Pavlova, have just birthed 8 puppies, soon ready to be adopted into 6 other families we know.

The Brits and other Northern Europeans living in Ibiza take their dogs everywhere. In London, if I saw a dog even close to a restaurant kitchen I would probably call the council and petition to get the establishment shut down. Here I find it sweet. When we went to a restaurant for lunch last week and when friends were denied bringing their dog inside, we were so indignant that we spent the duration of the meal bringing Tallulah scraps and tickling her belly.  By contrast, my Ibicenco neighbours, lovely people, have kept their two dogs in the smallish space surrounding their house, for the entire 10 years we have been living here. They aren’t mal-treated, they just aren’t part of the family. I find myself driving past willing the pair to scale a wall and sneak into the kitchen, jump onto the kitchen worktops and paw at whatever is simmering on the stove.

Back to the walk. The ramble. Let’s call it a ramble. We progressed as a team, initially led by Coco, one of the dogs and the 2-year-old, who with stick in hand was like the baby Moses of our group. It was bucolic and idyllic. Five minutes later and it all fell apart. We had arrived at the crescendo of our tour, the gorge. A small but dramatic cliff drop with the sea’s windy water crashing on the rocks below. We had to climb across the back, holding onto trees to keep us steady.  The baby is panting like the dogs, clinging to our legs, begging for ‘up’. The oldest’s fever has clearly returned, bringing the bike was a huge mistake, clearly flip flops would never suffice and we had one half litre bottle of water between us all. The look on my face, as I turned to OH, our organiser and guide, replaced the extremely sarcastic words: ARE YOU SERIOUS?

We scrambled across. The toughest two kids held the bike above their heads like African desert water bearers, spurring on the medium sized one with vertigo and whooping the woman with the slippy shoes for her successful crossing.  The dogs were absolute heroes. Companions, enthusiasts, leaders and also our protectors at the back. We arrived back at our starting point and made tea and ravaged biscuits, allowing the canine team members to climb all over the furniture and share our snacks. Another chink that this humbling, grounding paradise has softened in me. Maybe I’m just waiting to find my own Burger on the door step.

http://walkingibiza.com/ For details of organised walks

If you are feeling more adventurous, take the cycle routes as your inspiration and walk parts or loops of them http://www.ibiza.travel/en/cicloturismo.php 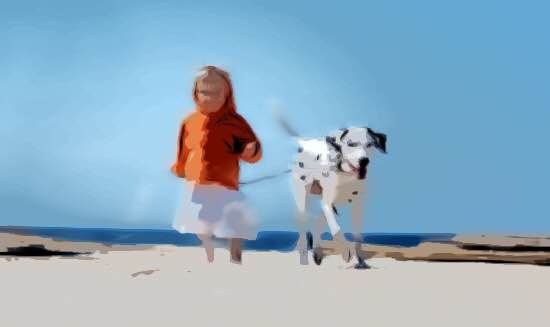