It is pouring.  Not the way you think you know it, where it buckets for a few dramatic minutes before the trusty drizzle returns.  This is sustained, endless, sheets of water.  This is getting from car into house utter drenching territory.  But I am sitting atop the beautiful cove of Sa Caleta.  I am nursing a terracotta cupful of the famous Cafe Caleta, just enough coffee to digest my seafood paella and that thimbleful (or so I tell myself) of rum to warm my insides and take the edge off of the damp humidity that can penetrate deep into the bones.

I am facing out to sea, looking between the sides of red cliff, as the ordinarily placid bay comes to life, an out-pouring of a season’s emotion, the cove that has played host to couples and singles and families and kids and their pets for scorching day after scorching day suddenly erupting with an uncontrolled rage, the people are gone and the sea is free.  Then from nowhere, a figure in gleaming black starts running down the slatted wooden path to the sea.  He is barefoot, holding a surfboard under arm, the waves pulling him faster and faster. Within moments, they have multiplied. There must have been a bat call. As the waves climb higher the surfers descend on the cove – 5, 10 then 15. One precious day, different from all the rest, a new kind of nature to be admired.

I am at Sa Caleta because everything else I had planned for the day has been cancelled. On account of the rain.  There is a low level state of island panic. The roads generally do not drain well, most people are driving unnecessarily slowly, a few unfeasibly fast.  There are power cuts so people can’t open their gates and garage doors, traffic lights are out but mainly people here ‘do not do rain’. It is the UK equivalent of being snowed in.  It is the best day to go to the shops or the bank or the doctor, because no one else can bear to.  8 out of 10 buildings are leaking somewhere.  Flagship retail shops in Ibiza are catching water in buckets, small shops are flooded and houses and apartments are leaking through orifices they didn’t know they had.

My front door has a gap under it. The outside is the same level as the inside.  During my first winter there was a heavy rain. The water came in. I was on a mission.  I went to the ferreteria. There was plenty of choice of placticky, brushy kinds of door guards.  They were clearly going to make the outside of my front door look monstrous.  I suffered a few weeks and then was very grateful when one side came unstuck and visitors’ shoes would get caught when they entered the house.  It had to go. What was I to do now? I asked the builder, I asked the carpenter, I asked the gardener.  They each presented elaborate solutions. I would lower the outside. I could raise the inside. I could change the front door.  I had expert opinions, I had sketches and drawings and plans.  I had quotes.

A day later another fuse gone in the utility room.  The electrician was over.  What would he do? I explained I had this problem, that water comes under the front door when it rains.  What solution should I go for? What would be do? He looked at me, confusion on his young, Ibicenco face.

And with that I cast aside a bit of the pre-planning Northern European in me and took another step towards the Southern Med. I binned the quotes with the plasticky faux wood brushy things. Of course I keep separate ‘floor’ towels for when the problem arises and when I get home from this little surf show, I will take my floor towels and mop up the clean, country water, with a smile on my face; that’s if the sun that is sure to burst through the clouds at any moment hasn’t dried it all up for me first. 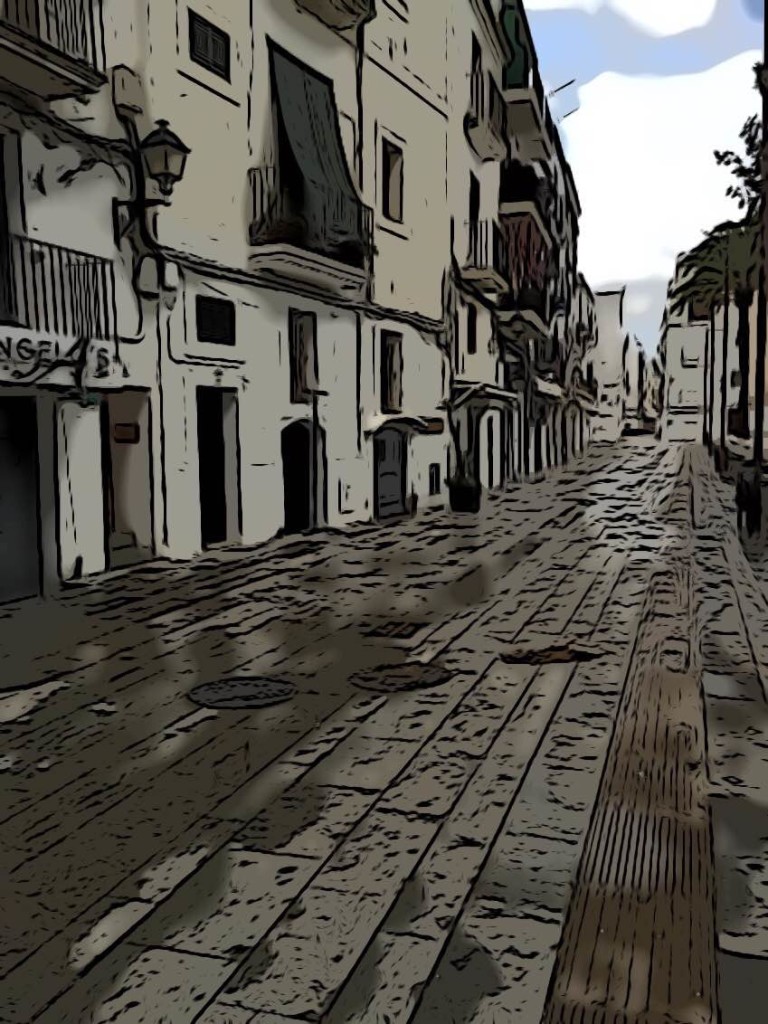